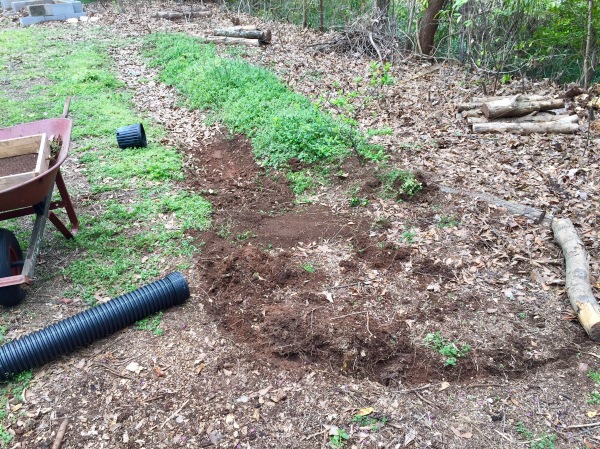 meet side yard swale : my first homescale earthworks project. this project was born of  an opportunity and a problem. progress has been slow, but feeling all the spring energies inspired me to revisit and finish the earthworks side of the project.

first, background. i removed a large swath of invasive plants (mostly wisteria and liriope) from my side yard last summer. the overly dense growth supported little biodiversity and harbored so many mosquitoes that we could hardly sit outside. i tore all the plants out and composted them, with little vision for what the space would become. once all the vegetation was gone, an opportunity.

concurrently, i had a problem. all the stormwater for this side of the house emptied into one downspout that flooded our side yard every time it rained. there was so much water that we frequently could not get to our cars!

i decided i would dig a swale in the cleared area and run the downspout into it. this is not a traditional swale in that it’s not on a contour, but i still designed it as a bioswale that will collect water and percolate into the ground behind the swale. there is a little slope to facilitate the percolation. the main goal was to get the water off our driveway/ walkway area.

i also had a bunch of reishi inoculated logs that i needed to bury – reishi fruits best if it’s partially buried. i decided to bury the logs in the berm of the swale, hoping that this would also keep the logs moist.

the idea was rounded out by planting two chickasaw plums and one spice bush on the berm of the swale to help hold the dirt in place.

let the digging begin! burying the mushroom logs in the berm:

the shape of the swale mapped out and most of the berm built. the pipe on the left is running off the downspout.

the small tree on the berm is the plum. the downspout empties into a small pool that is level with the rest of the swale. 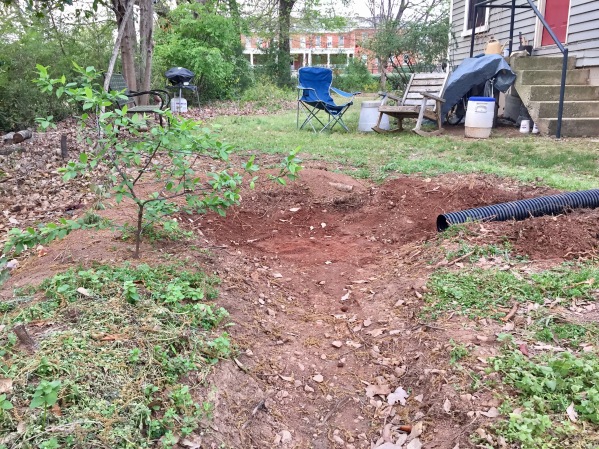 burying the pipe was quite a task.

berm around the pool mostly built and planted with eucherea, yarrow, and ecchinacea i got for free.

before the swale was fully dug. 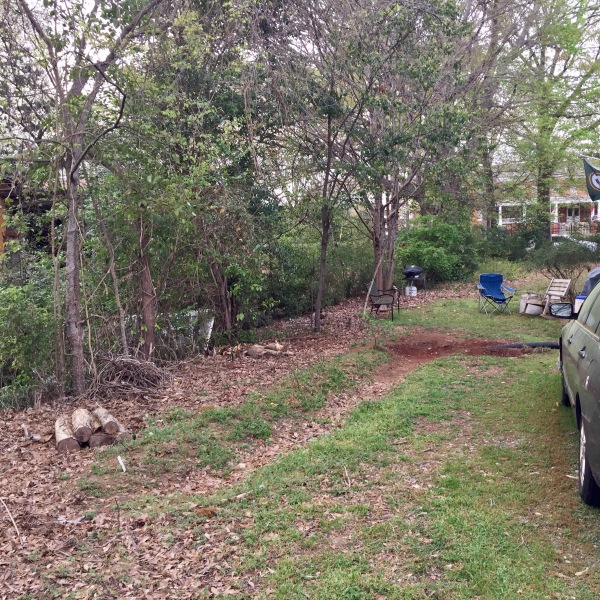 after the swale fully dug and pipe buried. 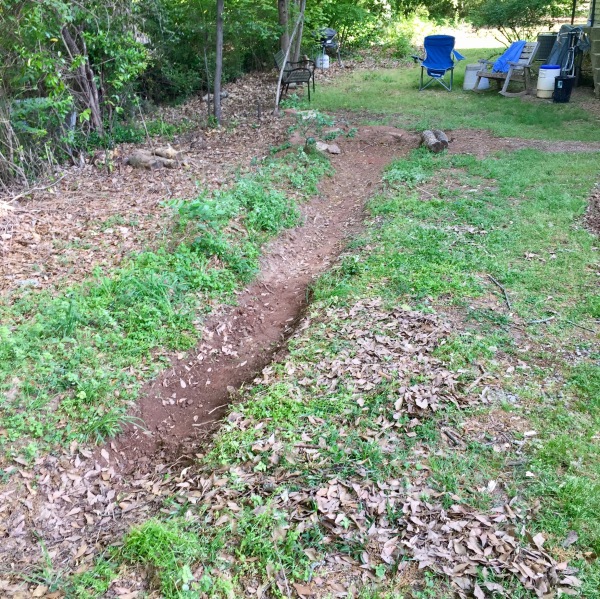 i have two maitake logs sitting on top of the pipe outlet until i can armor the whole thing with rock. 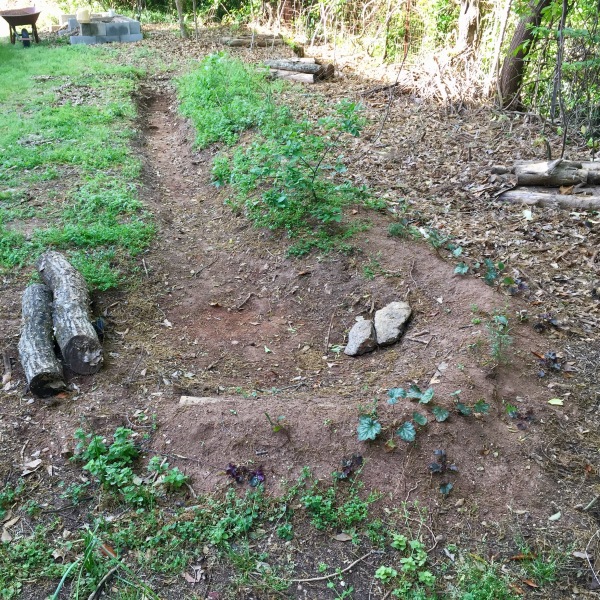 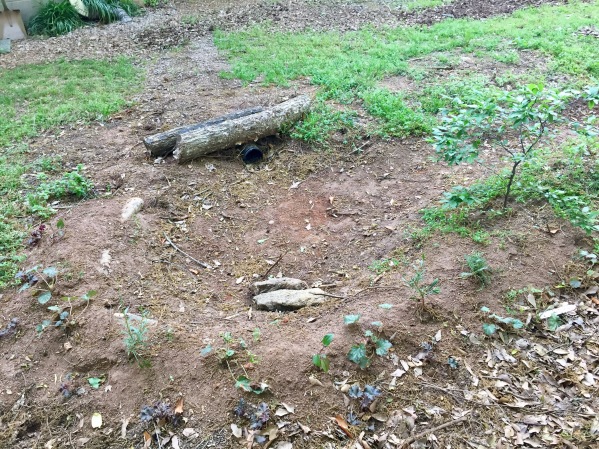 the biggest issue i ran into with this entire project was that much of the area i dug was an old grave driveway. the digging was so tough. i took shovel fulls of excavated material and sifted it through a metal sieve. i ended up with nice topsoil in my wheelbarrow and tons of gravel in the sieve.

i took all of the gravel and spread it in the low spots on our driveway.

i used the topsoil to fill in all the cinder blocks around my compost and seeded it with insect attracting flowers and sorrel for me.

finally, here are a couple before pictures of the area. it was overrun with chinese wisteria and liriope. i cut and dug out all of this crap. previously, the area was extremely buggy and we saw very few birds as there were no openings for them to access anything. now we see tons of birds! it’s been a true treat watching all the migrating ones this year. 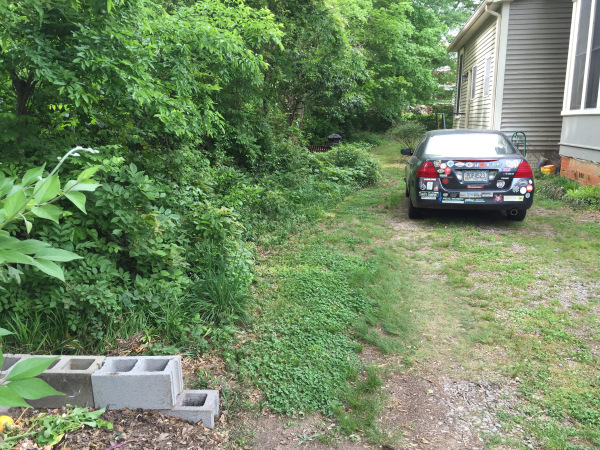 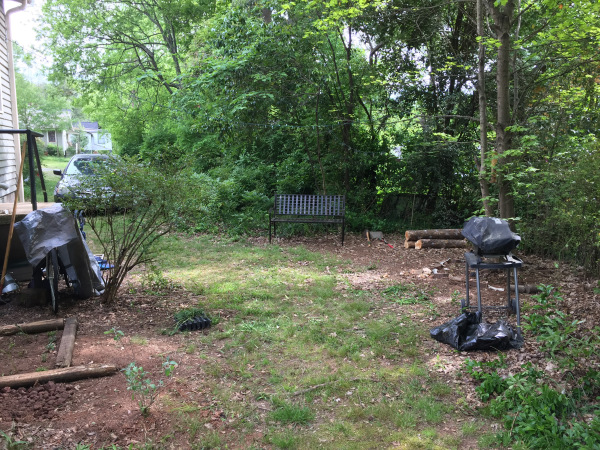 i am working on a design for a little food forest in the area. i have an elderberry and a fig to plant. updates on that later!